There are a number of options for treating prostate cancer in its early stages. Most of the information on this website assumes that you’re having surgery to remove your prostate but here’s a quick summary of other treatments you might be offered. We will be developing another website to discuss these options in more detail and bring you the experiences of men who’ve been through them.

Some men, especially those who are older decide not to have any active treatment immediately but to have their prostate cancer closely monitored.

The advances in computer and imaging technology have meant that there have been changes in radiation therapy in recent years. Previously the radiation oncologist would direct an external beam onto the area of your prostate. Now they use three dimensional guided therapy which takes into account the shape and size of the tumour.

Prostate radiation treatment usually lasts six to eight weeks. During this time the tumour and prostate gland can move around. With image guided radiotherapy three seeds are implanted inside the prostate. This allows the gland and tumour to be tracked. Your doctors can then use computer guided technology to direct the radiation beam to the tumour and prostate’s new positions. IGRT is usually offered to patients with low risk, early stage prostate cancers. 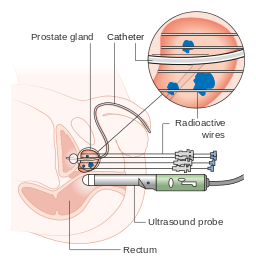 If you have early stage prostate cancer your doctor might suggest treating you with prostate radiation therapy.  This can be very successful. Previously with radiation therapy high energy rays were delivered by external beam. Brachytherapy is an advance on this.

With this therapy your urologist works with a radiation oncologist and a physicist. Using ultrasound guidance they implant small radioactive pellets or seeds into your prostate. The pellets then emit high doses of radiation only to your prostate over the course of several months. The advantage of this is that the radiation doesn’t affect the healthy tissues surrounding your prostate. You’ll usually be asked to go for a CT scan a few weeks after the seeds have been implanted. The doctors can then check that the radiation distribution is correct.

If you’ve had radiotherapy and your prostate cancer comes back usually surgery isn’t recommended. But cryotherapy can be an effective alternative. Cryotherapy involves freezing the diseased area which destroys all cells including cancerous ones.  It’s a very straightforward procedure which is done as an outpatient and recover is fast. But the downside is that any impotence which results will be permanent.

If you have later stage prostate cancer or you’ve had treatment but are at high risk of your cancer coming back you may be offered hormone therapy. This aims to lower your androgen levels. Androgens are male hormones such as testosterone which help prostate cancer cells to grow.

Hormone therapy won’t cure your cancer but can control it. Eventually the cancer cells will become resistant to the treatment.